This is the second part of a point-by-point review of the Russian dossier compiled by former MI6 agent, Cristopher Steele.

According to CNN, high-level advisers close to then-presidential nominee Donald Trump were in constant communication during the campaign with Russians known to US intelligence.

The dossier was very specific on who was leading the collusion and how the campaign was colluding with Russian intelligence:

This was managed on the TRUMP side by the Republican candidate’s campaign manager, Paul MANAFORT, who was using foreign policy advisor, Carter PAGE, and others as intermediaries.

One email that is now in the possession of Robert Mueller, dated  July 7, 2016, shows Paul Manafort writing to an intermediary of a close Putin ally and Russian aluminum oligarch Oleg Deripaska: “If he needs private briefings we can accommodate.”

This is important because when Manafort joined the Trump campaign, he owed Deripaska nearly $20 million dollars!

At this time there is no evidence in the documents showing that Deripaska received Manafort’s offer or that any briefings took place. Nonetheless, investigators believe that the exchanges, which reflect Manafort’s willingness to profit from his prominent role alongside Trump, created a potential opening for Russian interests at the highest level of a U.S. presidential campaign.

Manafort had been a top adviser to Ukraine’s pro-Russia Party of Regions from 2004 to 2014, whose name appeared on an off-the-books “black” ledger.

Financial records obtained by The Associated Press confirm that at least $1.2 million in payments listed in the ledger next to Manafort’s name were actually received by his consulting firm in the United States, including payments in 2007 and 2009.

Also, there was multiple efforts of the Trump campaign to get a secret meeting with Russian President Vladimir Putin.

Foreign policy advisor George Papadopoulos, who was meeting with Kremlin spies promising dirt on Hillary Clinton, volunteered to set up a meeting between Trump and Putin during a gathering with advisers, including Attorney General Jeff Sessions, who was a Republican senator at the time.

Reportedly many in the room for good reason were against the idea, except for Donald Trump who approved the meeting and deferred to Jeff Sessions, who also liked the idea, and directed the campaign to look into it.

The Russian regime had been behind the recent leak of embarrassing e-mail messages, emanating from the Democratic National Committee (DNC), to the WikiLeaks platform

This was another bullseye hit for the dossier.

Months before the United States Intelligence Community had come to the unanimous conclusion in January 2017 that Russia was behind the hacks of John Podesta and the DNC, the Christopher Steele dossier outlined the exact targets and the exact reasoning behind the Democrat hacks.

But the dossier went even further:

The reason for using WikiLeaks was “plausible deniability” and the operation had been conducted with the full knowledge and support of TRUMP and senior members of his campaign team.

It was later revealed by the website, The Smoking Gun, that Trump campaign advisor Roger Stone was having regular communication directly with Guccifer 2.0 over Twitter, and published the direct messages between the two.

Stone denied that Guccifer 2.0 was Russian intelligence, instead tweeting he was a “HERO“. Unfortunately for Stone the United States Intelligence Community concluded in a report that they are certain Guiccifer 2.0, who publicly claimed responsibility, was a Russian intelligence agent or group of agents who were behind the Podesta and DNC hacks and had given the materials to Wikileaks.

Roger Stone also claimed this was the only discussions between him and Guccifer 2.0, but he later let slip that he communicated with the Russians, but just on a more secure platform.

This is evident when Stone tweeted “Trust me, it will soon the Podesta’s time in the barrel”, months after John Podesta’s email was hacked, and about one month before the hacked emails were released, and also telling lunatic conspiracy theorist Alex Jones, “I am assured the mother lode is coming” just days before the documents were made public.

In August 2016, Stone told InfoWars that Wikileaks has “devastating” information on Hillary Clinton and on that same day sent an email to Trump adviser Sam Nunberg that he had dinner with Assange the night before.

Stone also tweeted after the election that he “had a “perfectly legal back channel to Assange”.

Another bullseye for the dossier, however this was being reported on during the Republican National Convention when the GOP party platform was being debated.

In return the TRUMP team had agreed to sideline Russian intervention in Ukraine as a campaign issue and to raise US/NATO defense commitments in the Baltics and Eastern Europe to deflect attention away from Ukraine, a priority for PUTIN who needed to cauterise the subject.

The intelligence report details that Trump would refrain from speaking forcefully, if at all, during the 2016 presidential campaign about Russia’s 2014 incursion into eastern Ukraine. In return, Russia would provide WikiLeaks the documents it stole from the Democratic National Committee.

First, Donald Trump spoke out many times during the campaign against NATO and our European allies, which baffled many. Making wild claims like how NATO was now “obsolete” and they don’t respect the United States.

Trump even once made the claim that Putin would never invade Ukraine, even though Russian forces have been there for months, even annexing the Crimean peninsula.

Second, the Trump delegation at the convention was quiet on every single platform discussion except this one. This was the only policy position Trump took a stand on and demanded they change their support to deliver “lethal weapons” to Ukraine’s defense of an invading Russia to “provide appropriate assistance”.

The justification for the Republican’s changed position was new though, and put into context that it a complete and surprising reversal from about every other Republican’s position on Ukraine, you can understand how this doesn’t make sense unless the party’s new standard-bearer requested it.

That position, to no longer fully support Ukraine against Russian invaders, is still in the Republican party platform today: There was some controversy around the time of the Republican National Convention about the accuracy of this report when Trump’s campaign chair Paul Manafort insisted that they weren’t involved. This was despite first hand accounts of Maine delegate Eric Brakey, Texas delegate Diana Denman, and Washington D.C. delegate Rachel Hoff all made public comments that it was the Trump campaign who requested the softer language on Ukraine.

Also, the Trump campaign’s national-security policy representative J.D. Gordon, who attended the subcommittee as an observer, claimed the report was false because he “never left” his “assigned side table, nor spoke publicly at the meeting of delegates during the platform meeting.”

One would think this would all be resolved by looking at the meeting minutes, but they were conveniently discarded.

Luckily, months later J.D. Gordon drastically changed his story to say he did in-fact speak privately with RNC national security subcommittee chairman Steve Yates during the meeting in which the amendment was discussed, and told him that language about providing Ukraine with “lethal defensive weapons” was a “problem” because it broke with Trump’s statements on wanting improved relations with Russia and not wanting to go World War III over Ukraine. He said Yates told him they would have a “robust discussion with delegates, and that was it.”

So there you have it. Trump making good on both promises, which were both major shifts in the Republican platform.

Of these three, only the state-sponsored cyber operations has been verified. As we described above, the United States Intelligence Community concluded in a January 2017 report that they are certain Guiccifer 2.0, who publicly claimed responsibility, was a Russian intelligence agent or group of agents who were behind the Podesta and DNC hacks and had given the materials to Wikileaks.

The intelligence flow from the Trump team to Russia concerned the activities of business oligarchs and their families’ activities and assets in the U.S.

The dossier reports that the information that Trump was exchanging with Russia mostly included the activities of the Russian oligarch’s activities here in America, which apparently was of great interest to Vladimir Putin.

However on this specific point we do not have any information.

Negative media publicity surrounding alleged Russian interference in the U.S. election campaign in support of Trump deflected media and the Democrats’ attention away from Trump’s business dealings in China and other emerging markets

The allegation in the Steele Dossier is that a bright spot of the Russian election interference becoming more publicly well-known was that it was able to deflect from Trump’s business deals with China.

Remember, Trump never divested from his companies. So he still owns, operates, promotes and receives profits from them while in office.

Some of these business deals include:

As president, Trump has talked tough on China and even started a trade war by implemented tariffs (which are taxes on consumers, you and me, and not China), but has stayed away from any policies that would hurt his businesses.

Donald Trump has claimed many times as president and during the campaign that he barely has any connections to Russia and he definitely has no business deals with Russia. But those claims changed as we learned that Trump and his family did in-fact have many business deals and investments with Russia.

And the Dossier was 100% correct in its report.

Here is the exact text from the Dossier addressing this claim:

Finally, regarding TRUMP’s claimed minimal investment profile in Russia, a separate source with direct knowledge said this had not been for want of trying. TRUMP’s previous efforts had included exploring the real estate sector in St Petersburg as well as Moscow but in the end TRUMP had had to settle for the use of [REDACTED] rather than business success.

The reality, as we explained in Part 1, is that Trump couldn’t be more wrong. Some of these potential business deals include:

The last item in the list, a Trump Tower Moscow deal, is the most important, because Donald Trump was trying to secure a deal while he was running for president, and during the same time the Dossier was being authored.

And it’s got Donald Trump’s own signature on it. 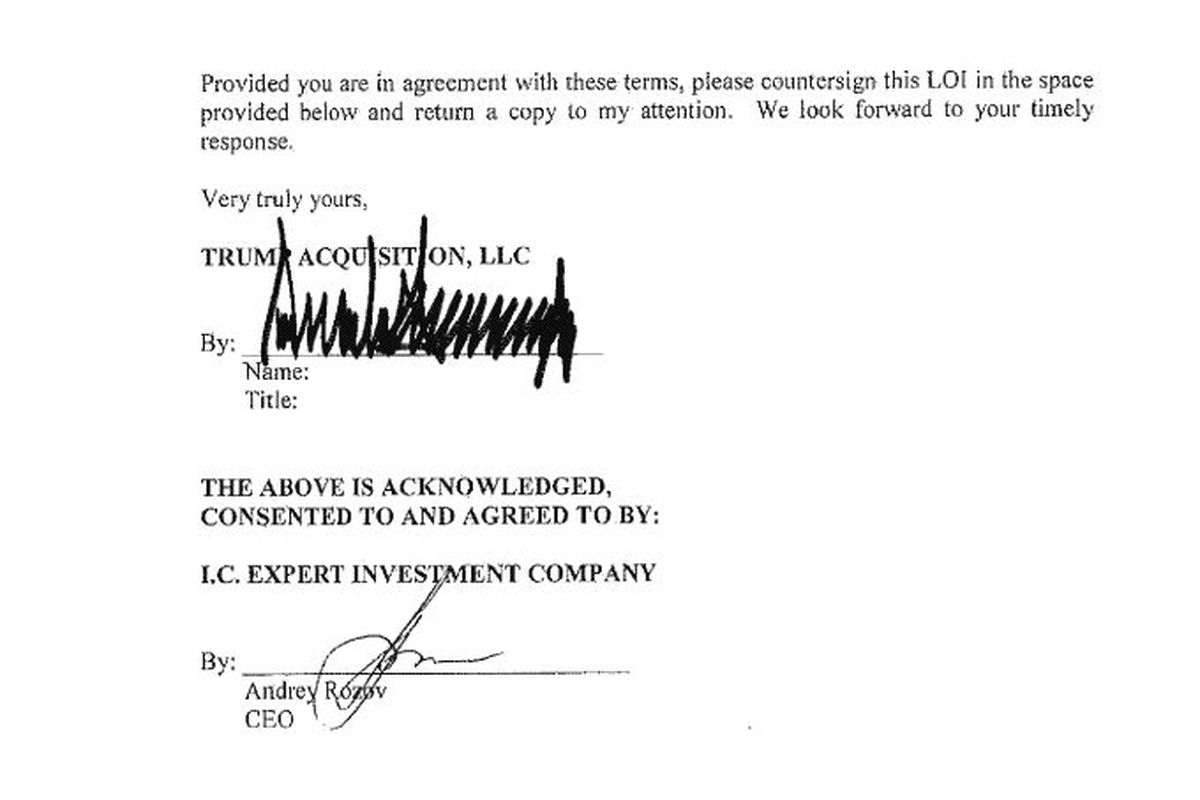 While we don’t know what was redacted, possibly access to Russian banks (the only banks left who would loan a scam-artist like Trump), it’s pretty clear the Dossier was covering well-known facts.

People in Trump’s campaign and those working for Trump knowingly colluded with Russians, a foreign adversary, with the express intent on electing him President of the United States of America.

They leveraged Trump’s businesses, which he still receives profits from as President, as a leverage.

How Stone Interacted with Russia’s Guccifer and Wikileaks, Newsweek