In accepting his party’s nomination for president, Donald Trump said “here, at our convention, there will be no lies.” But we found plenty of instances where Trump twisted facts or made false claims.

TRUMP: My opponent wants to essentially abolish the 2nd amendment.

THE FACTS: Clinton has proposed gun regulations, like background checks to purchase firearms. Yet the 2008 Supreme Court decision protecting and individual’s right to possess firearms also stated that the right isn’t unlimited — and can be subjected to regulations. (NBC)

THE FACTS: Trump is correct that there has recently been an uptick in crime, including in some (but not all) of America’s largest cities, but he is cherry-picking.

The country has essentially halved its national homicide rate since 1991. Overall, violent crime is down significantly since the 1980s and 1990s, according to FBI statistics. 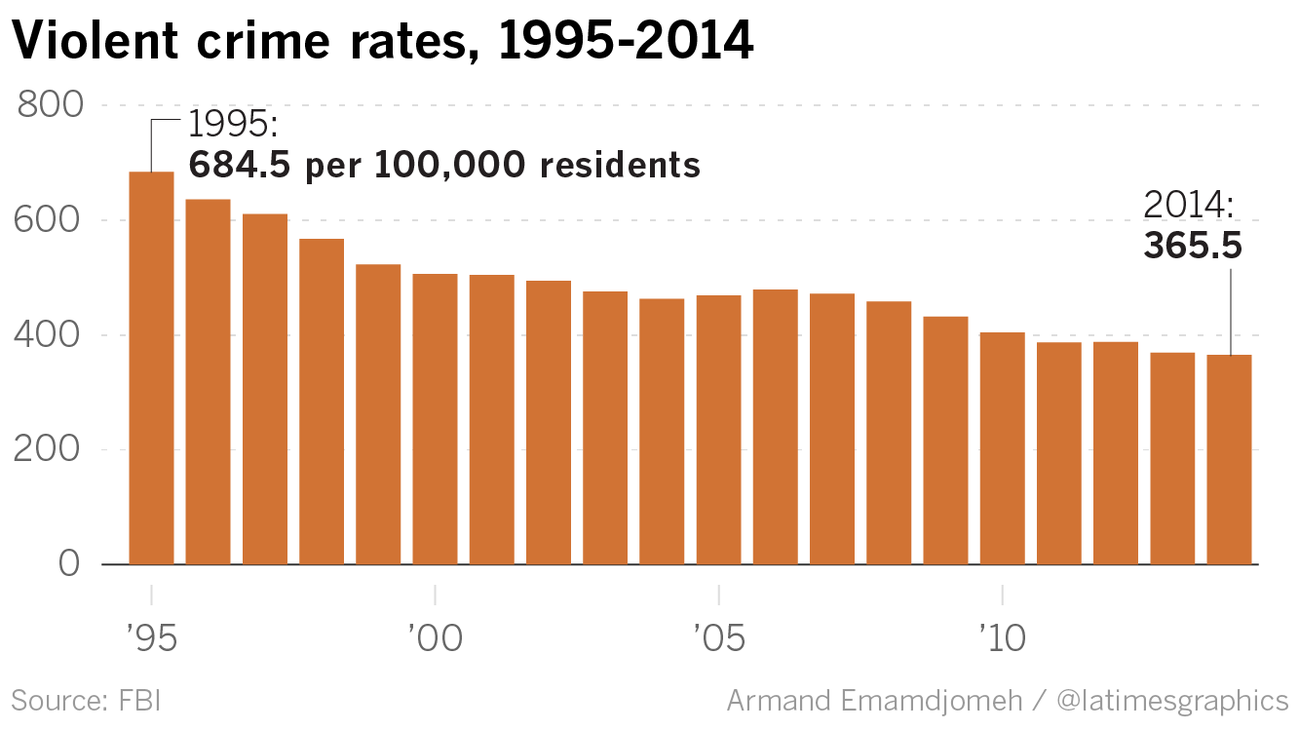 TRUMP: In our nation’s capital, killings have risen by 50 percent. They are up nearly 60 percent in nearby Baltimore.

THE FACTS: Those statistics are based on an analysis performed by The Washington Post, which found no clear pattern in which cities saw increases in homicides. (NY Times)

TRUMP: In the president’s hometown of Chicago, more than 2,000 have been the victims of shootings this year alone. And more than 3,600 have been killed in the Chicago area since he took office.

TRUMP: And when a secretary of state illegally stores her emails on a private server, deletes 33,000 of them so the authorities can’t see her crime, puts our country at risk, lies about it in every different form and faces no consequence – I know that corruption has reached a level like never before.

THE FACTS: Trump twisted the facts when he said that Clinton “illegally” stored emails on her private server while secretary of state, and deleted 33,000 of them “so the authorities can’t see her crime.” The FBI on July 5 cleared Clinton of wrongdoing, and found no evidence of a cover-up. (FactCheck.org)

TRUMP: The number of new illegal immigrant families who have crossed the border so far this year already exceeds the entire total from 2015.

THE FACTS: Those numbers come from a report by the Department of Homeland Security, which told Congress late last year that nearly 1 million undocumented immigrants have been ordered deported but remain in the country. Mr. Trump did not mention that most of those 180,000 are likely people charged with nonviolent crimes.

TRUMP: Where was sanctuary for all the other … Americans who have been so brutally murdered [by undocumented immigrants], and who have suffered so, so horribly?

TRUMP: We all remember the images of our sailors being forced to their knees by their Iranian captors at gunpoint. This was just prior to the signing of the Iran deal.

THE FACTS: It actually came AFTER the signing of the Iran deal, which happened on July 14, 2015. The sailors were captured in Jan. 2016 — right before President Obama’s State of the Union address. (NBC)

TRUMP: Iran is on the path to nuclear weapons.

At the time of the deal, Iran was already on a path to acquiring nuclear weapons.

Prior to the agreement, the breakout time was thought to be months, but now it is more than a year for at least 10 years, as the nonpartisan Congressional Research Service explains in its May report “Iran Nuclear Agreement.” (FactCheck.org)

TRUMP: We must abandon the failed policy of nation-building and regime change that Hillary Clinton pushed in Iraq, Libya, in Egypt, and Syria.

THE FACTS: Trump criticized Clinton for her “failed policy of nation-building and regime change” and he counted Libya among them. Left unsaid was that Trump also supported the military ouster of Moammar Gadhafi at that time.

In a video posted to his YouTube channel in February 2011, Trump stated, “We should do it on a humanitarian basis. Immediately go into Libya, knock this guy out very quickly, very surgically, very effectively and save the lives.” (FactCheck.org)

TRUMP: President Obama has almost doubled our national debt to more than 19 trillion dollars, and growing.

TRUMP: We will repeal and replace disastrous Obamacare. You will be able to choose your own doctor again.

Trump used a popular false talking point about the Affordable Care Act when he said that he’d repeal it and “you will be able to choose your own doctor again.” The law didn’t take away the ability to choose a doctor.

Police Killed in Line of Duty

TRUMP: The number of police officers killed in the line of duty has risen by almost 50% compared to this point last year.

THE FACTS: This is a tragic stat which is why Trump should not be dishonest with these figures. The number of officers killed in the line of duty has not changed compared to last year.

The Officer Down Memorial Page, which tracks officer deaths, reports that 68 police officers have been killed so far this year, almost exactly the same as the 69 who were killed in the same period last year. (NY Times)

TRUMP: Nearly four in 10 African-American children are living in poverty, while 58 percent of African-American youth are now not employed. Two million more Latinos are in poverty today than when the President took his oath of office less than eight years ago.

TRUMP: My opponent has called for a radical 550 percent increase in Syrian refugees on top of existing massive refugee flows coming into our country under President Obama. She proposes this despite the fact that there’s no way to screen these refugees in order to find out who they are or where they come from. I only want to admit individuals into our country who will support our values and love our people.

THE FACTS: While criticizing Hillary Clinton’s support for admitting more Syrian refugees to the U.S., Trump said that “there’s no way to screen” those refugees to determine “who they are or where they come from.” That’s false. All refugees admitted to the U.S. go through an extensive vetting process that involves multiple federal agencies and can take up to 24 months to complete. (FactCheck.org)

TRUMP: Then we are going to deal with the issue of regulation, one of the greatest job-killers of them all. Excessive regulation is costing our country as much as $2 trillion a year, and we will end it.

Trump repeated an overstatement on the costs of regulation — a claim we heard on the second day of the convention from Sen. Shelley Moore Capito. Trump said that “excessive regulation is costing our country as much as $2 trillion a year,” but that figure comes from a conservative group’s admitted “back-of-the-envelope” calculation and is an estimate of regulatory costs that does not include potential savings.

The calculation comes from the Competitive Enterprise Institute, a staunch opponent of government over-regulation. In the report, “Ten Thousand Commandments: An Annual Snapshot of the Federal Regulatory State,” author Clyde Wayne Crews Jr. calculates the 2013 cost of federal regulatory compliance at nearly $1.9 trillion.

That figure is based on the Office of Management and Budget’s annual reports to Congress on the benefits and costs of federal regulation. The problem is that the Competitive Enterprise report focused on the “costs” and ignored the “benefits” listed in those reports. That tells only half the story. (FactCheck.org)

TRUMP: While Hillary Clinton plans a massive tax increase, I have proposed the largest tax reduction of any candidate who has declared for the presidential race this year – Democrat or Republican. Middle-income Americans will experience profound relief, and taxes will be simplified for everyone.

THE FACTS: The nonpartisan Tax Policy Center and The Tax Foundation reached a similar conclusion about Clinton’s tax plan. Nearly all of the tax increases would fall on the top 1 percent; the bottom 95 percent of taxpayers would see little or no change in their taxes.

On the flip-side, Trump’s tax plan includes tax cuts that disproportionately benefit the rich (like Trump) and there is no possible world where the revenue from his proposed new taxes could make up for the tax cuts. Not by a long shot.

As we already reviewed, estimates of Trump’s proposal would reduce federal revenue by $9.5 trillion over its first decade and reduce an additional $15.0 trillion over the subsequent 10 years causing massive cuts to every government program. (FactCheck.org)

TRUMP: [Hillary Clinton] supported NAFTA, and she supported China’s entrance into the World Trade Organization — another one of her husband’s colossal mistakes and disasters … She supported the Trans-Pacific Partnership.

THE FACTS: This is not entirely true. Trump is correct that Clinton backed NAFTA and China’s entry into the WTO, which took place while her husband was president. Yet although touting the TPP trade agreement while she served as secretary of state, Clinton has since opposed the measure. Notably, Trump’s vice-presidential running mate Mike Pence also has praised NAFTA and TPP. (NBC)