A top security guard for Donald Trump smacked a protester in the face after the man chased him for snatching a banner Thursday, video shows.

The guard grabbed the blue sign that said “Trump: Make America Racist Again” — a play on the billionaire’s campaign motto — outside a press conference on the Donald’s new pledge of loyalty to the Republican Party, NY1 Noticias video shows. 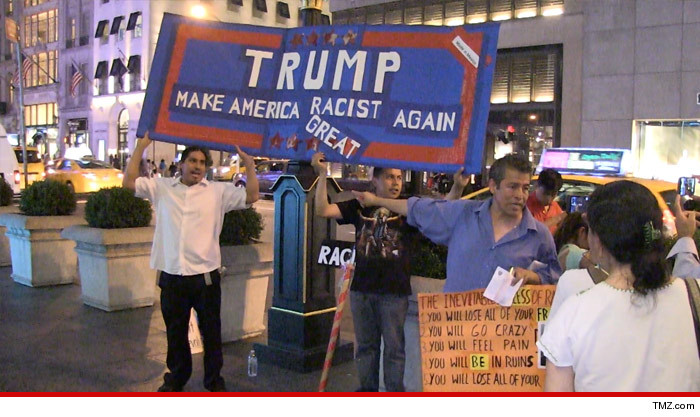 Demonstrator Efrain Galicia ran after Schiller and appeared to reach for the banner and grab the guard from behind. Within seconds, the guard turned around and whacked him in the face with an open hand as a scrum of reporters snapped photos.

Galicia stumbled as another guard tried to restrain him, appearing to briefly put him in a stranglehold. Galicia fought back, grabbing at the second guard’s arms before the two yelled at each other outside Trump Tower.

A source familiar with the Trump campaign identified the first guard as Keith Schiller, Trump’s director of security and longtime bodyguard.

After the 10-second tussle, Galicia told reporters the guards are “just acting like their boss.”

“This man thinks he can do whatever he wants in this country, and we’re going to stop him,” Galicia said in Spanish.

An attorney for Galicia said he is exploring all “legal remedies that may be available” as Schiller appeared to “attempt to suppress free speech and the growing public criticism of the Trump campaign.”

“The video in a sense speaks for itself,” Benjamin Dictor told the Daily News Friday. “The actions were just exceedingly aggressive especially given the fact that demonstrators were on a public sidewalk speaking out about issues of public concern.”

On 8/21/2018 a New York State judge has shot down an effort by President Donald Trump to dismiss a lawsuit against his private security guards for allegedly roughing up demonstrators who were protesting outside of Trump Tower months after he announced his presidential run.

The New York Law Journal reports that Bronx Supreme Court Justice Fernando Tapia on Tuesday declined to dismiss the suit filed by protesters who claim they were roughed up by the president’s security team back in 2015.

Specifically, Tapia said that Trump himself “authorized and condoned” his security guards to rough up the protesters, and he specifically cited the president’s statement that “maybe they deserved to be roughed up” on the grounds that “it was absolutely disgusting” what the protesters were doing.

The lawsuit was filed by five Latino activists who claim that they were roughed up by longtime Trump bodyguard Keith Schiller and two other men who were employed as part of the then-candidate’s security personnel.