Cohen’s Secret Liaison With the Kremlin

This is the eighth part of a point-by-point review of the Russian dossier compiled by former MI6 agent, Cristopher Steele, which documents Donald Trump’s lawyer Michael Cohen held secret meetings with Kremlin officials in August or September 2016 in Prague. In the Dossier there are three reports covering these secret meetings, 2016/135, 2016/136, and 2016/166, each verifying and clarifying what was previously known.

You can read our previous review on the report of the reactions in the Trump camp here.

The Dossier makes the allegation that Donald Trump’s personal fixer (and pet owl) Michael Cohen secretly met with representatives from the Kremlin at their office in Prague in August or September 2016.

Michael Cohen actually has many ties to Russia. He and his younger brother Bryan worked for pro-Russian Ukrainian mobsters, his father (a Polish holocaust survivor) is a leading property developer in Moscow, and Michael is known to brag that he is a member of the Russian mafia.

So he would be an obvious choice to make contact with members of the Russian government.

In three separate reports, the Dossier details how in late summer 2016 Michael Cohen and Kremlin officials met at a Rossotrudnichestvo office so the parties could claim “plausibly deniable” while holding the conversations at a site entirely under Kremlin control.

What is interesting is Rossotrudnichestvo, which is Russia’s foreign aid organization, is under the jurisdiction of the Russian Ministry of Foreign Affairs headed by Sergei Lavrov, who is mentioned in the Dossier as being one of the heads of the Russian effort to interfere into Amercia’s 2016 election.

Coincidentaly Trump as President invited Lavrov into the Oval Office, where he bragged how he fired “nutjob” James Comey to ease the political pressure on him, and let slip classified Israeli information.

Lavrov on the left, in the Oval Office.

On Cohen’s secret meetings with the Kremlin, the Dossier makes five basic claims:

Michael Cohen was in Prague in August or September 2016

However a mobile phone belonging to Michael Cohen sent signals ricocheting off cell towers in the Prague area in late summer 2016 and the DOJ has evidence he entered the country through Germany, proving Michael Cohen was in Prague at the time the Dossier said he was to meet with Russians to coordinate their efforts in the 2016 election.

The problem with Cohen is that he kept denying it.

For example Cohen told The Atlantic that the Dossier was completely wrong because he was in New York for most of August and then spent time at the University of Southern California with his son on August 29th.

…oh wait, the Dossier said he was there in August or September and was very clear it was hazy on the exact date.

“COHEN had been accompanied to Prague by 3 colleagues and the timing of the visit was either in the last week of August or the first week of September.”

So to mount a defense, Cohen publicly provided his passport for review. Specifically just the cover: 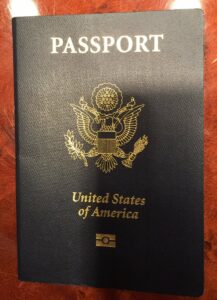 And after it was pointed out that customs officials normally stamp the inside of a passport, he gave Buzzfeed his passport which showed no entries for Prague, went on Fox News’ Hannity to demand an apology from Buzzfeed, saying this proves he couldn’t have attended an alleged secret meeting with Russian agents.

Except that’s not true. Cohen’s passport  actually hurts his case and makes it more plausible he was in Prague.

Cohen’s passport stamps show that he traveled twice to London in 2016 and once to Italy, from July 9 to July 17. 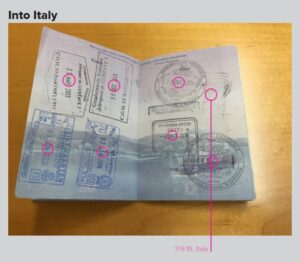 Once you are in the European Union, and travel to different countries in the union, they don’t stamp your passport. It’s called the Schengen Area, where 26 nations operate with open borders including Prague and the counties he visited.

So if he entered the E.U. through Rome, Italy, traveled to the Czech Republic, and then returned back to his point of entry, there would be no record of this in his passport.

Furthermore, when Paul Manafort was arrested by the FBI he had three passports seized at his residence. Three!

So a passport won’t actually prove or disprove anything, but providing receipts, which you need to keep for reimbursements and tax purposes, would have actually ended the conversation here. And while Cohen freely admits to being in Rome just before the Republican National Convention, he wouldn’t provide any receipts proving where he’d gone.

Michael Cohen was pretty evasive and giving contradictory accounts on his travels and this question of his travel was an open question for the longest time, that is until his offices were raided. That’s when a report surfaced in McClatchy with the blockbuster revelation that Robert Mueller has direct evidence Michael Cohen was lying to everyone and was in fact made a secret trip to Prague in 2016.

The report says DOJ investigators have traced evidence that Cohen entered the Czech Republic through Germany, apparently during August or early September of 2016 exactly as the Dossier reported.

Remember Cohen wouldn’t have needed a passport for such a trip, because both countries are in the Schengen Area, in which 26 nations operate with open borders.

Then came another blockbuster report, again by McClatchy, that Cohen’s cell phone was picked up in Prague in the late summer of 2016 and electronic eavesdropping by an Eastern European intelligence agency picked up a conversation among Russians, one of whom remarked that Cohen was in Prague at the same time.

Michael Cohen met with members of the Kremlin and Konstantin Kosachev

If Mueller’s evidence is true and Michael Cohen was secretly in Prague, then it is entirely possible and most likely he was there to meet with Konstantin Kosachev, a senator in Russian parliament’s upper house with close ties to Putin, to cover up recently revealed ties between the Trump campaign and Moscow in order to “sweep it all under the carpet and make sure no connection could be fully established or proven.”

Why else would Cohen hide his trip to the Czech Republic during the 2016 campaign that we now know happened?

Was he there to eat goulash so good he wanted to keep the restaurant a secret? Probably not.

Was he there to commit treason against the United States to get Donald Trump elected? Most likely.

The Dossier does make note that Kosachev, a Russian senator, was chosen to give further “plausible deniability” to Putin, because Putin is in the executive branch of the Russian government and Kosachev is in the legislative.

Let’s be frank, the fact that there are more than 80 Russian contacts that the Trump team claimed didn’t exist but eventually came to light is proof enough there is an active cover-up in the Trump administration to hide proven connections to the Kremlin.

Members of the Trump team who covered-up contacts and deals with Russians during the campaign or transition include:

These cover-ups are verified. But we don’t know yet if Michael Cohen flew to Prague to meet with Russian representatives to specifically help manage these cover-ups.

As part of their investigations into Russia’s 2016 election interference, special counsel Robert Mueller and the FBI scrutinized the financial activity of the Russian embassy in Washington D.C. and uncovered a $29,000 wire transfer to the embassy’s U.S. bank account to “finance election campaign of 2016.”

That’s right, the Russians made cash payments and made sure to note it had to do with financing the United States election campaign.

But that wasn’t all. The FBI and bankers at Citibank uncovered dozens of suspicious financial transactions by Russian diplomats living in Washington. The first, made just 10 days after the US presidential election in 2016, was a $120,000 lump-sum check to then-ambassador Sergey Kislyak, who was mentioned in the Dossier as having knowledge of Russia’s election interference, that was twice as large as any payment he’d received in the previous two years.

Ten days after the U.S. presidential election in 2016, a lump-sum check was issued to then-ambassador Sergey Kislyak was marked “payroll,” who was mentioned in the Dossier as having knowledge of Russia’s election interference. Kislyak then deposited the money in his Citibank checking account, then wired the funds to his account in Russia in two $60,000 installments.

What was odd about this payment was, it was twice as large as any payment he’d received… in the previous two years.

Other flagged transactions were $325,000 in payments to the Russian Cultural Centre in Washington; and $2.4 million paid to small home-improvement companies controlled by a Russian immigrant living in Virginia.

The fact that Russia was making unusual cash withdrawals around the time of the presidential election makes this so close to being deemed verified, because what are the chances, but we don’t know yet where the money ended up.

However, because of a Mueller indictment, we do know that Russia did direct hackers to hack into “email accounts at a domain hosted by a third-party provider and used by Clinton’s personal office.” They also “targeted seventy-six email addresses at the domain for the Clinton campaign.”

Were payments made to anti-Clinton hackers with these suspicious funds? Probably.

As of now there are no new reports of continued secret meetings between Russia and the Trump team… except for one.

Trump and Putin before secret meeting

Helsinki was the same summit where, standing next to Russian President Vladimir Putin himself, Trump turned on America’s intelligence services, and again mused about how much better it might have been if Russia had cracked Clinton’s server and gotten her documents.

Putin and Trump held a secret two-hour closed door meeting with only their translators. It was immediately noted to be a highly unusual meeting for two adversarial super-powers, or any heads of state to not include at least some of the aides to attend.

Once it became public that Mueller could place Michael Cohen in Prague at the same date and time mentioned in the Dossier, after years of outright denials, all of a sudden secret meetings with the Kremlin became a distinct possibility.