Most presidential candidates go out of their way to release detailed white papers on the policies that will separate them from the rest of the pack, so experts and wonks can dissect every last piece of information, and show how qualified they are for the highest office in the land. Not Donald J. Trump. While he released a statement on his campaign website that has a brief overview, most of Trump’s policies on his tax reform had to be cobbled together from different speeches and interviews on different dates. In short, specifics and details have been very hard to come by.

The result of three independent policy reviews from well-respected organizations, and even conservative economic organizations, have all come to the same conclusion; Trump’s tax plan will reduce revenues but truly help Americans, as long as you are a billionaire American like Trump.

Trump’s original plan was released last year, which is no longer available on his website, and was a complete and total disaster. Experts trashed it for adding another $11 trillion dollars to the national debt and giving little-to-nothing to the poor and middle-class Americans while being a total payday to the wealthy.

So Trump made major changes to his tax plan in August, 2016, in the speech at the Detroit Economic Club.

The details of this new plan include:

What Trump is proposing basically amounts to: 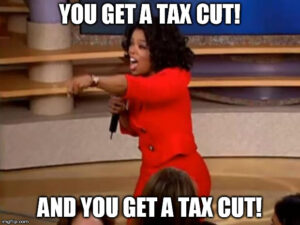 While you initially might think, “Great! More money in my pocket!” Stop and consider the consequences. How would the government fund itself?

Most Tea-Party Republicans would welcome a smaller government, but Trump signaled he would not touch entitlement reform so we can assume Social Security and Medicare spending will remain the same, and he even has plans to increase military spending on average by $250 billion over 5 years and infrastructure spending by $500 billion over 5 years. These programs account for two-thirds of the total U.S. budget, any other reforms would be such a small drop in the bucket that it would have little-to-no effect on the economy.

With all of this lost revenue the government will need to recoup the income elsewhere, yet Trump offers no plans to add new or increase existing forms of income. This leaves a massive gap between little money being collected and larger bills to pay, which will force the government to borrow more money adding trillions to the federal debt.

Trumps tax reform isn’t much of a reform as it is removing revenue at every level. The conservative-leaning Tax Foundation estimates the proposal would reduce federal revenue by $4.4 trillion to $5.9 trillion over its first decade. Most of the revenue loss would come from individual income tax cuts, but about a third would be from the reduction in the corporate income tax rate and the introduction of special rates on pass-through businesses.

While this figure below from the non-partisan Tax Policy Center has yet to be revised to reflect Trump’s latest scaled-down plan, we can see what the effect would be when Trump’s original numbers are forecasted out 10 to 20 years.

As we can see, the effect on the debt will be so massive from revenue losses and extra payments on interest, the United States will need to borrow money in order to make up the difference.

Not bad for someone who brands himself as a small-government conservative.

Moody’s Analytics has also found Trump’s economic proposals will create a more isolated U.S. economy, which is directly in-line with his “America First” stance. However the result will be less global trade, and trade contributes substantially to the growth of the U.S. economy. So less global trade means a considerably smaller economic growth.

The Trump plan will collapse the current seven tax brackets to three brackets.

Whenever you hear Republicans pushing for simplifying the tax code you should actually be hearing 2 things:

Here is the example Trump gives on his website for a married couple filing jointly:

The way our tax system works is called a “progressive tax system,” this means as you make money throughout the year, as soon as you start earning money in a higher tax bracket that money will be taxed at that higher rate.

But a flatter or more regressive tax system is never about helping you identify what your income will be taxed at, but will always mathematically benefit the ultra-rich, like Donald Trump.

Let’s take a look at how much middle-class taxes would differ from the current system under Trump’s proposal.

Wow that’s amazing! Look how much money you’ll be saving! Republican candidate Donald Trump is really looking out for the little guy!

Before we come down from our high from the windfall of cizash in our pockets, let’s zoom out to see how a millionaire would fare:

And Trump is a “billionaire” right? So how would the billionaires manage?

Did you notice that the middle class example only had their tax rate drop 5 percentage points but the millionaire/billionaire tax rate dropped about 15 percentage points? Isn’t that interesting how that would benefit the billionaire real estate mogul who came up with the plan? And if you sat here and thought, “Well won’t more money in the hands of the wealthy create jobs? They are the job creators!” That experiment already occurred in the 1980’s, tried again recently in Louisiana and Kansas and the answer is a resounding “no”. End of story.

No business of any size, from a Fortune 500 to a mom and pop shop to a freelancer living job to job, will pay more than 15% of their business income in taxes.

Congress could impose strict rules in an attempt to limit such changes in worker status, but the boundary is quite difficult to enforce under current law and would be even harder to police if the Trump proposal were enacted. Nevertheless, for purposes of our analysis we have assumed that such rules would be put in place and be effective. Without such rules, the plan would lose substantially more revenue than estimated in the Tax Policy Center’s analysis.

No family will have to pay the death tax.

Oh yes the estate tax, affectionately called “the death tax” by conservatives to create a false impression of the tax in the mind of the voter.

Do you own a farm or business worth $5 million dollars are more? Are you in the 2% of that group who are unable to find any of the large loopholes to avoid paying the estate tax? Then you have absolutely nothing to fear from the estate tax.

For the record, the estate tax works to level the playing field, as it were. Ideally, everyone would start at the same point, and would gain his or her money by personal merit, rather than having the luck of being born into it; inheritance tax would facilitate this, and would thus improve social mobility, and might make the American Dream somewhat feasible.

But we’ll say this again just to be completely clear. It is very highly likely you are not in any danger of the “death tax” and it is really just another tax break for the wealthy should it be repealed. Wealthy like Donald Trump.

This is probably the most popular of all of Trump’s tax proposals, and it makes sense. Even Hillary Clinton later proposed a child care tax credit of her own. However, like all of Trump’s ideas, the implementation was not very well thought out because it would not help the people who would need it the most.

Trump’s plan would be available as an above-the-line deduction on your federal tax return, meaning it could be claimed by both itemized deduction and standard deduction families. The amount would be pegged to the average cost of child care in your state (the national average is $12,000 per year per child), and can be claimed for up to four children. It is disallowed (apparently in a cliff cutoff) at $500,000 for a married couple and $250,000 for all others.

There are 2 problems with this.

The Tax Policy Center estimates that 45.3 percent of Americans pay no federal income tax. (If this somehow makes you angry, R-E-L-A-X, this is all by design and a good thing. Watch this video to understand more.) Because the lowest income earners are among that percentage that pays no federal income tax, and therefor have nothing to file on tax day, a deduction on their federal tax return is completely useless.

And second, the deduction is available both to families who enroll their children in child care and those who do not. You get it if you have a child, full stop. So it’s not really a child care deduction per se, but just a larger dependent deduction. So while this can help some middle-class families, again this does nothing to target the poor or lowest income earners who pay no federal taxes.

Trump claims his plan is revenue-neutral, meaning tax cuts will be equally met with new revenues, but analysis proves this to be false. The proposals to offset revenues has shown from multiple sources to not even come close to recouping the losses and would require massive cuts to entitlement programs or the military.

“I do not believe [revenue-neutral] to be true under any scenario remotely resembling Mr. Trump’s plan.”

One of the most-often repeated replies is that the estimates put forth by independent economic organizations do not count the economic benefit of companies, no longer spending money on taxes, will be able to spend on hiring more people and making investments.

The problem with this view is, when you drastically reduce revenue as much as Trump’s plan does you’ll need to borrow in order to make up the difference. By raising debt, this will cause interest rates to rise, thereby negating any positive impacts of Trump’s plan.

Make no mistake, this is a plan designed to put more money in Trump’s own pocket while placing a long term burden on the American tax payer by requiring massive amounts of borrowing.

“I just can’t see how you can enact tax cuts that size and come up with any credible spending cuts to match it, when you’re saying that entitlements are untouchable and that the main spending problem is waste, fraud and abuse. What I find very ironic is for a supposedly non-conventional candidate, he invokes every conventional fiscal myth that you can think of.”