So we would like to walk everyone through the link between CO2 emissions and climate change, so if you are ever confronted in an argument you’ll have a better understanding of why the climate denialist is completely wrongheaded, and it’s actually very cool and interesting stuff to know.

If you are looking for proof then you don’t have to look any farther than the vast amount of scientific literature spanning back over a century that has the overwhelming scientific evidence that carbon dioxide [CO2] in the atmosphere is the primary driver of a rate of climate change that this planet has never before seen in millions of years.

So let’s start at the beginning and talk about the science behind CO2 in the atmosphere. There are just two simple facts we have to remember when talking about climate change:

That is the beginning and end of climate science. That’s it. And as we’ll show, both facts are supported by overwhelming and reproducible evidence.

Carbon in the atmosphere traps heat

Better yet, try your own scientific experiment at home. You’ll just need two soda bottles, one with water, the other with carbonated water, and two thermometers.

Then, over 100 years ago in 1896 Svante Arrhenius calculated that, based a simple principle of physics, higher levels of CO2 in the atmosphere would raise global temperatures. Arrhenius was the first to use basic principles of physical chemistry to calculate the extent to which increases in CO2 atmospheric will increase Earth’s surface temperature through the greenhouse effect.

These two discoveries are the cornerstones of climate science, in 150 years have yet to be disputed, and instead continues to be confirmed by observation. Once again, these are not controversial but proven a thousand times over.

To explain further, the science, in short, says the following. CO2 lets through short wave light, the kind that passes through our atmosphere, but traps long wave radiation, the kind that gets reflected from the surface and travels back into space. This extra heat retained in the atmosphere warms the planet.

After we can answer the science behind global climate change, the next seed of doubt that climate deniers try to throw out there is, does human activity have any effect on the climate?

They will try to point out our planet has a long and well documented history of cyclical climate change that started hundreds of millions of years ago predating any current human impact. So how do we know for sure that humans are the cause of more CO2 in the air?

The answer is so simple and irrefutable, isotopes.

For those who might be a little rusty on chemistry, the same element can have a different number of neutrons, we call those isotopes.

So what scientist can do is take a sample of carbon, check the ratio  between Carbon-12 (which has 6 neutrons if you are playing at home) and Carbon-13 (which has 7 neutrons), and they look at the ratio of C12/C13 in fossil fuels, and scientists have found all fossil fuels around the world have the same common ratio.

They then look at current C12/C13 ratio in plants today and track it over time.

What the scientists see is a very recent and dramatic shift from what was a “normal” C12/C13 in plants during pre-industrial times, to a ratio closer to that found in fossil fuels.

So go. Do your research and submit your work to a scientific journal and prove everyone wrong. We’ll wait. 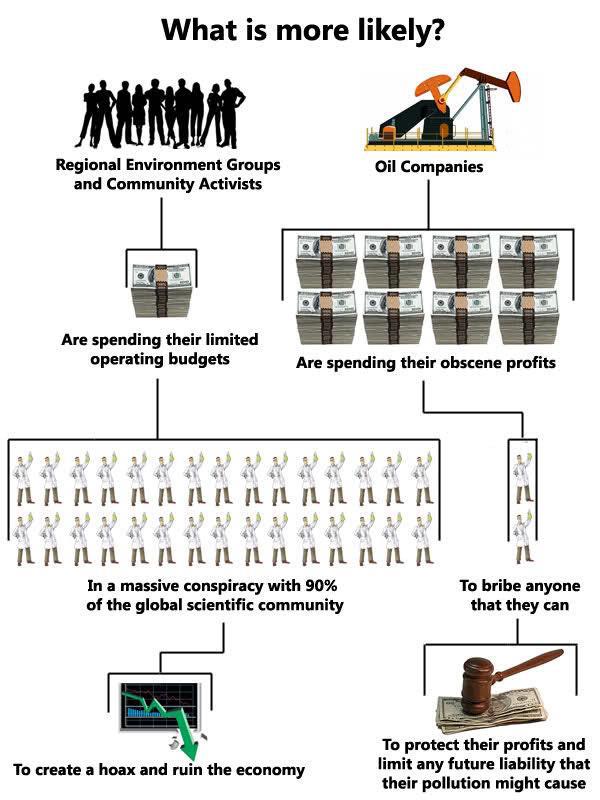 See those zebra stripes? The dark and light areas? That is actually one year of trapped snow and ice, one summer and one winter, and inside are tiny pockets of trapped air.

Hahah! Hahaha! Hahaha! Oh you’re so fucking funny. Hahah! Oh what a joker you are! Hahaha! You know what else is hilarious? Your willful ignorance of the English language and not recognizing there is a clear difference between “weather” and “climate”.

Here’s a video for kids to help you understand that weather is what is happening right now, and climate is a trend of weather over a very long period of time. And if you watch the entire thing you get a sticker and a cookie!

No, you’re a denialist. It’s good to be skeptical, it’s good to approach new information critically, but there is another side of skepticism that you are completely ignoring.

If someone presents you with evidence that has a stronger veracity than your current information or deeply held beliefs, then you admit you are wrong.

Because you refuse to do this, then that is why you are a science denialist.