Trump Plans on Banning All Muslims from Entering the United States

In a press release by Donald Trump’s campaign and reiterated in almost every Republican debate:

Donald J. Trump is calling for a total and complete shutdown of Muslims entering the United States until our country’s representatives can figure out what is going on.

Until we are able to determine and understand this problem and the dangerous threat it poses, our country cannot be the victims of horrendous attacks by people that believe only in Jihad, and have no sense of reason or respect for human life.

While Korematsu v. United States has never been challenged and could be a slim avenue for implementation, most legal scholars would deem this bigoted plan unconstitutional. Trump’s proposal would violate the First Amendment’s Religion Clauses, the equality dimension of the Due Process Clause of the Fifth Amendment, and the Constitution’s general prohibition on religious tests outside of the immigration context as it would also conflict with the spirit of the No Religious Test Clause of Article VI.

Donald Trump sends anti-refugee tweet, “13 Syrian refugees were caught trying to get into the U.S. through the Southern Border. How many made it? WE NEED THE WALL!”

13 Syrian refugees were caught trying to get into the U.S. through the Southern Border. How many made it? WE NEED THE WALL!

These were not illegal immigrants trying to evade authorities, instead these were legal asylum seekers following legal asylum protocol.

Harvard economics major Joseph Choe addressed Donald Trump during a question and answer session, asking the candidate about statements he had made over the summer in which he asserted that South Korea takes advantage of the United States.

Before Choe, an Asian-American, could finish his question, Trump interrupted the man asking, “Are you from South Korea?”

“I’m not. I was born in Texas, raised in Colorado,” Choe responded.

The GOP presidential candidate shrugged as awkward laughter from the audience escalated into full-blown cheering for Choe.

“No matter where I’m from, I like to get my facts straight, and I wanted to tell you that that’s not true. South Korea paid $861 million,” Choe said before Trump cut him off again.

Trump’s question represents an all too common experience for Asian-Americans, who researchers say are stereotyped as the “perpetual foreigners.”

“[E]thnic minorities, especially Asian Americans and Latino/as, are often asked … questions like, ‘No, where are you really from?’ or ‘I meant, where are you originally from?’” a San Diego State University study explained. The implicit message, the study said, is that “they do not share the American identity or have in-group status.”

Or perhaps in this case, the right to question Donald Trump.

Just for the record, Trump is also wrong about South Korea not paying anything toward the costs of U.S. military support.

Trump first draws a link between Asians and theft then mocks Asian negotiators with racist broken-english impression at a rally in Iowa.

When these people walk in the room, they don’t say, ‘Oh, hello! How’s the weather? It’s so beautiful outside. Isn’t it lovely? How are the Yankees doing? Oh they’re doing wonderful. Great. They say, ‘We want deal!’

Trump Blasts Jeb for Not Blaming the Correct Race

After Jeb Bush commented in the August Republican debate about Chinese birth tourists, which angered many in the Asian community, Donal Trump comes to their defense by insulting Mexicans with his tweet, “Asians are very offended that JEB said that anchor babies applies to them as a way to be more politically correct to hispanics. A mess!”

Asians are very offended that JEB said that anchor babies applies to them as a way to be more politically correct to hispanics. A mess!

There is a very real phenomenon of parents from Asian countries coming to the United States while they are expecting a baby with the intent of securing American citizenship for their offspring.

But there are no reliable statistics on how widespread the “maternity tourism” trend is and which foreign nationals participate most in the phenomenon in the United States.

No matter how you look at maternity tourism, the impact on local, state, and federal  this is so small of an issue the only logical motivation is racism.

Speaking with to Robert Costa of the Washington Post, Donald Trump defends his racist statements made during his candidacy announcement saying it was “okay” for him to have described undocumented immigrants as “rapists.” When asked about the using a word like rapists to describe a population, Trump responded:

It is a very rough word. It’s okay to use.

It’s a very interesting read and worth your time.

Donald Trump claims that he rallies a new “Silent Majority”. For those not familiar with politics, the Southern Strategy focus on motivating the “Silent Majority” which is a racist code word for “white people.”

“It comes deeply from Richard Nixon’s basic political orientation,” said Rick Perlstein, a historian who has written multiple books on conservatism and the Nixon era, including Nixonland: The Rise of a President and the Fracturing of America and The Invisible Bridge: The Fall of Nixon and the Rise of Reagan.

The language of the silent majority, was a distillation of Nixon’s political philosophy, “the idea that there are two kinds of Americans — the ordinary middle-class folks with the white picket fence who play by the rules and pay their taxes and don’t protest and the other are the people who basically come from the left.”

And over time, the term silent majority was used to exclude more than just anti-war protesters. The “noisy minority,” as Perlstein called it, was fairly large. “It was black civil rights militants,” he said. “It was feminists who were supposedly burning their bras. It was students who were smoking drugs. It was rock ‘n’ roll bands. It was everything that threatened that kind of 1950s Leave It to Beaver vision of what America was like before everything literally and figuratively went to pot.” 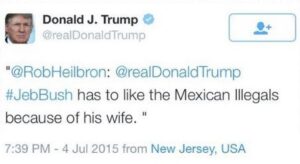