Donald Trump responded to the worst terror attack since 9/11 with a no-holds-barred attack on Muslims and Hillary Clinton that played loose with the facts and was rife with inflammatory rhetoric.

He claimed Clinton wanted to disarm Americans and let Islamic terrorists slaughter them, while seeming to overinflate the number of Syrian refugees and insinuating the perpetrator of the Orlando attack was a foreigner.

In a speech pulsating with tough talk that will likely please his supporters, the presumptive Republican nominee also renewed his call for a ban on Muslim migration into the United States — and extended it to cover all nations with a history of terrorism. Hinting at a huge expansion of presidential power, he vowed to impose such a system by using executive orders.

“The current politically correct response cripples our ability to talk and to think and act clearly,” Trump said framed by two American flags at Saint Anselm College in New Hampshire. “If we don’t get tough, and if we don’t get smart, and fast, we’re not going to have our country anymore. There will be nothing, absolutely nothing, left.”

Trump’s speech Monday was a clear attempt to use the fallout from Sunday’s attack in Florida that left 49 dead to position himself as a strong agent of change determined to flush out a culture of weakness and incompetence that he said had let terrorism fester and threatened the existence of U.S. culture itself.

It is a strategy that appealed to his base and helped him win the Republican primaries, and he is now deploying it after a rough couple of weeks signifying the start of the general election.

As part of that effort Monday, he delivered some of the most explosive and forceful political rhetoric uttered by a major U.S. political figure in many years, seeming to show little regard for facts.

Trump refused to name Omar Mateen, the killer who went on the rampage in an LGBT nightclub in Orlando, during his speech. But, adding a line not found in his prepared remarks, he said that he was born “an Afghan, of Afghan parents, who immigrated to the United States.” But the perpetrator of the Orlando massacre was born in New York to parents from Afghanistan.

The real estate magnate also appeared to equate all Muslims who seek to come to the United States with the perpetrators of recent terror attacks — another claim that seems to fly in the face of the evidence about a community that has been present in the U.S. for decades.

“We cannot continue to allow thousands upon thousands of people to pour into our country many of whom have the same thought process as this savage killer,” Trump said.

“Remember this, radical Islam is anti-woman, anti-gay and anti- American.”

He also accused Clinton of endangering the country with her plans to bring in more foreigners.

“Hillary Clinton’s catastrophic immigration plan will bring vastly more radical Islamic immigration into this country, threatening not only our society but our entire way of life,” he charged. “When it comes to radical Islamic terrorism, ignorance is not bliss. It’s deadly — totally deadly.”

He accused Clinton of wanting to “allow radical Islamic terrorists to pour into our country. They enslave women and they murder gays. I don’t want them in our country.”

And he repeated an unsubstantiated claim that Clinton wants to deny Americans’ 2nd Amendment rights.

Trump’s rhetoric — which was heavy on toughness but often short on policy details — contrasted sharply with the more nuanced and conventional response to the attack delivered earlier by Clinton, the presumptive Democratic nominee.

But he made a case that the current policies were not working and were leaving America dangerously exposed to a tide of Islamic terror he said was coming its way — an argument that many in the GOP find compelling.

He has pointed to the political benefits of the rising fears of terrorism following other recent attacks.

In each instance, Trump sought to project both strength and a lack of concern for the reaction to his provocative rhetoric, calculating that both would help him rise in the polls during the Republican primary. Indeed, a majority of Republican voters agreed with Trump’s call to temporarily ban all foreign Muslims from entering the United States.

“Whenever there’s a tragedy, everything goes up, my numbers go way up because we have no strength in this country,” Trump said on CNN after last December’s San Bernardino shooting. “We have weak, sad politicians.”

Donald Trump’s speech was heavy on inflammatory rhetoric, light on details and facts.

Trump: “The Muslim ban is temporary. We have to find out what is going on?”

There are terrorists running around in Syria and Iraq. They have a book. They think that book is great. The use their book to justify killing others. Why is that so fucking hard to understand? Can he shut up about his stupid ban now?

Plus, aside from being completely and totally xenophobic, there is one major logical flaw with this policy. Meet Omar Mateen, 29 year old who killed at least 50 people in massacre Orlando. An American, born in New York. 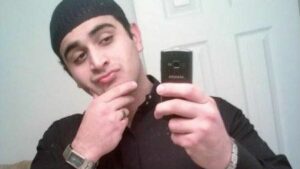 Meet James Wesley Howell, 20 year old who was caught with cache of weapons, ammunition and explosive-making materials in his car and apparent plans to attend the L.A. Pride festival in West Hollywood. An American, born in Indiana. 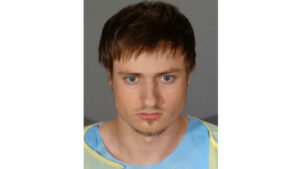 Exactly how would banning foreigners from entering the United States have solved the Orlando massacre or helped to prevent another possible shooting in Los Angeles by Americans?

Trump: A “tremendous flow” of Syrian refugees is pouring into the country free of screening also seemed to be an exaggeration.

Since May 1, 2016, 2,019 Syrian refugees have been admitted to the U.S., according to a State Department official, while only 1,736 were taken in over the first seven months of the fiscal year.

Entries have risen in recent months but the process has been painstaking for many of those hoping to win refuge in America and have to submit to a months-long vetting process. Being accepted into the United States as a refuge is the hardest route to enter this country. If a foreign person wanted to do harm here in America there are much easier ways than the hardest route to enter this country.

Trump: “Each year the United States permanently admits 100,000 immigrants from the Middle-East.”

Interestingly, there are a lot of countries in the middle-east that are our friends, like Israel. So is Donald Trump inferring that Israelis are savages? If we remove our friends from the list of Middle-Eastern countries, like Egypt and Saudi Arabia, then that leaves only 33,000 immigrants who were admitted into the United States in 2014 from the Middle-East. That would mean Trump is off by 67%.

We’ll have to revise Donald’s truth grade to an ‘F’.

Trump: “[Clinton] wants to take away Americans’ guns and then admit the very people who want to slaughter us.”

Clinton has called for universal background checks and stricter controls on firearms, but has never called for the abolition of the 2nd Amendment. Another false statement.

You know who has far more effective at being more anti-woman and anti-gay in this country? Republicans.