Republican presidential frontrunner Donald Trump managed to squeeze a public job interview into a news conference at the site of his upcoming hotel in Washington, D.C.

A woman in the crowd introduced herself as a 9/11 survivor and a veteran of the wars in Iraq and Afghanistan and voiced support for his plans for the U.S. military. Then she asked if work at the Trump International Hotel would be available to veterans.

“What are you talking about here? We are doing some of that actually already,” Trump responded. “We have it very much involved. Why what are you looking for? What kind of a position?”

The real estate magnate invited the woman up to the podium to conduct a job interview for a position at the forthcoming hotel.“So what’s your experience in front of the world?” he asked.

The woman replied, “Well I design. I do wreaths. I do all types of decorations.”

“And you like this building?” Trump said. “So here’s what I’m going to do. There’s the man.”

Trump directed the woman to one of his associates while telling the crowd, “If we can make a good deal on the salary, she’s gonna probably have a job.”

Later on, a reporter pointed out that it’s “pretty remarkable” that Trump just offered a job to a complete stranger and asked what inside his gut led him to that decision.

“I felt good about her. I’ll tell you what, I looked at her, I said she, you know, I have gut instincts, OK? And we’re allowed to have that,” Trump said. “And I looked at her and she asked a question and it was a very positive question… she just seemed like a good person to me.”

He said that maybe she won’t qualify for a position but he thinks she will.

It was a totally staged publicity stunt.

The reporter who praised Donald Trump’s military policy and inquired about veterans jobs was not a member of the press. Yet somehow, Alicia Watkins, a retired Air Force staff sergeant who has appeared on Oprah, was given media credentials by the Trump campaign and permitted to ask a question of the candidate, a question that (surprise!) turned into an impromptu job interview.

The Trump campaign, which handled credentials for the press conference, initially told CNNMoney that Watkins worked for “a site called Troops Media which focuses on military and veterans issues.”

Later that afternoon Dylan Byers of CNNMoney tweeted that Troops Media did not seem to exist.

When told that there was no evidence of any such site on the Internet, the Trump campaign said it would look into the matter.

CNNMoney then received a call from a woman who identified herself as Alicia Watkins who said she would send an email explaining “why Troop Media is no longer on the Internet as of today.”

The woman, who said her phone was about to run out of battery, hung up while being asked if she still wanted to identify herself as a reporter. The woman called from a blocked number and did not leave any contact information. The promised email has yet to arrive.

When Stop The Donald Trump looked into Troops Media, we can confirm that Troops Media does not exist. We did find a blog called http://troopsmedia.blogspot.com/ with nothing on it except a post from January 5, 2016 stating the blog is rebuilding after a hacker attack. No cached pages can be found on search engines, so it cannot be determined if the site had any content before January 5th. And finally no blogger.com profile id could be retrieved to help identify the owner.

Also we found http://troopmedia.org, with no contact information anywhere on the page (it was finally found on their Facebook page), a broken Contact Us link, and whose owner information is blocked using a proxy, but surprisingly has very many pro-Trump articles. Their Facebook page, which used to regularly post military news but now includes amazing military articles such as, “Create an English Cottage Kitchen“, “Fix Lawn Spots“, and “Landscape Design Process and Thinking“, shows that this is probably now a hoax site. The Air Force Times was able to reach out to TroopMedia.org but a representative for the site said that Watkins had not been employed there. 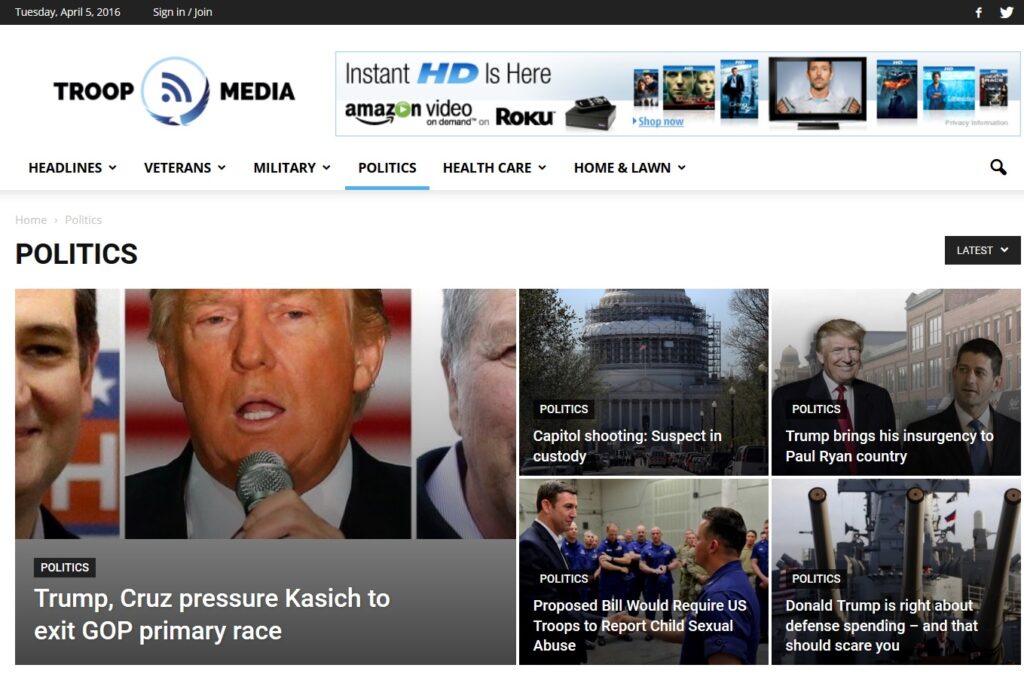