Donald J. Trump has released a letter from his personal physician attesting that his health is “extraordinary.”

The letter, gushing in tone and signed by Dr. Harold N. Bornstein of Lenox Hill Hospital in Manhattan, was four paragraphs long and provided few specific laboratory test results. The letter made a sweeping declaration in a tone oddly similar to how Mr. Trump talks about himself.

“If elected, Mr. Trump, I can state unequivocally, will be the healthiest individual ever elected to the presidency,” Dr. Bornstein wrote in the final paragraph of the letter, which was dated Dec. 4 but not released until Monday. 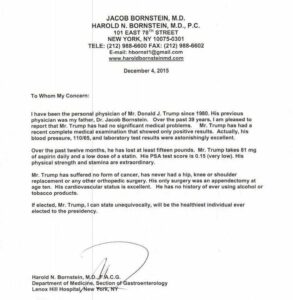 The note also came 11 days after Mr. Trump, 69 and a leading candidate for the Republican presidential nomination, vowed on Twitter to release a “full medical report” about his physical health and fitness to serve as president, which he said would “show perfection.” His pledge came after a Politico report pointed out his penchant for fatty foods, his lack of routine workouts and, until now, his refusal to release a medical report.

In releasing the letter, Mr. Trump erred by attributing the medical report to his current physician’s father, Dr. Jacob Bornstein. “I am proud to share this health report, written by the highly respected Dr. Jacob Bornstein of Lenox Hill Hospital.”

The note begins as an open letter, “To Whom My Concern,” apparently meaning, “To whom it may concern.” The email from Mr. Trump that contained the note said it was from his doctor, Jacob. According to an obituary, Jacob Bornstein died in 2010; the note lists Jacob Bornstein as Mr. Trump’s previous physician.

Dr. Harold Bornstein said in his letter that he had taken over his father’s practice and had cared for Mr. Trump since 1980. “Over the past 39 years, I am pleased to report that Mr. Trump had no significant medical problems,” giving a duration that suggested he had been caring for him since 1976.

Mr. Trump was a patient of the senior Dr. Bornstein. Presumably, the son had access to his father’s records to account for the four-year difference in time. It is an unusual instance in which a politician’s health has been attested to by a single physician group over such a long period of time.

A “recent complete medical examination” of Mr. Trump “showed only positive results,” the letter said. It gave few specifics about that examination but contained a number of flamboyant descriptions. For example, Dr. Bornstein said Mr. Trump’s blood pressure, 110/65, and laboratory test results were “astonishingly excellent.” Presumably, the normal blood pressure reading was without benefit of any medication to lower a higher blood pressure.

Mr. Trump has lost “at least 15 pounds” in the past 12 months. But his exact weight before and after the loss was not stated. Reporters who have covered Mr. Trump’s campaign said their impression was that he had gained weight over recent months.

Mr. Trump takes a low-dose aspirin (81 milligrams, or baby aspirin) daily as well as a statin to lower his high cholesterol, the report said. The letter did not state the levels of Mr. Trump’s cholesterol and other lipids before and after the statin therapy. Aspirin and the statin were the only drugs Dr. Bornstein said Mr. Trump was taking.

The letter said Mr. Trump did not use tobacco or alcohol products and had no history of cancer or bone or joint surgery. His only reported surgical operation was an appendectomy at age 10.

Reporters have asked Mr. Trump about his military draft status. He said he had received medical deferments from the Vietnam War because of a bone spur in his foot. When asked about it over the summer, Mr. Trump said he could not recall which foot was afflicted. Reporters who have covered Mr. Trump in recent months said they have not noticed him wincing or limping while walking.

A low prostate-specific antigen, or PSA, level of 0.15 was one of the few specific test results stated by Dr. Bornstein. The fact that the physician said Mr. Trump “has suffered no form of cancer” would exclude removal or destruction of prostate tissue as a reason for such a low PSA level. Dr. Bornstein did not indicate when the test was performed or whether it had been repeated.

For many years, doctors checked the PSA level to detect prostate cancer. But recently, some groups have recommended against routine testing, saying the choice should be discussed between patient and doctor.

Dr. Bornstein made no mention of whether Mr. Trump received a flu shot annually or whether he has received standard immunizations like those against tetanus and pneumonia.

The physician’s letter also gave a subjective appraisal of Mr. Trump’s physical strength and stamina, which were said to be “extraordinary,” but the report did not include any objective measurements to support this.

In a cover letter to Dr. Bornstein’s letter, Mr. Trump said: “I am fortunate to have been blessed with great genes — both of my parents had very long and productive lives.” He did not say his father, Fred, developed Alzheimer’s disease beginning in his late 80s. The genetics of most forms of Alzheimer’s and dementia are not known with certainty. Doctors and patients consider it prudent to be aware of such a risk and to be checked if specific signs become apparent.

The objective measures that Dr. Bornstein used in saying Mr. Trump, if elected, would be the healthiest president were unclear.

While physicians are supposed to be advocates for their patients, a number of ethicists and historians have cautioned them not to become boosters or to distort or mislead the public when discussing the medical history of a patient who is politically active.

Physicians who have served in the White House and candidates’ personal physicians have lied or distorted their patients’ medical history in the past, including the doctors of Franklin D. Roosevelt and John F. Kennedy. In interviews, recent White House physicians said they would not risk jeopardizing their reputations to hide any serious ailment affecting a president in their care.

The note from Dr. Bornstein praised Mr. Trump’s “physical strength and stamina.” Those are the specific words that Mr. Trump has used to tar Hillary Clinton, who is leading in polls for the Democratic presidential nomination. Mrs. Clinton months ago released a lengthy doctor’s note that included information about her concussion in December 2012 and her recovery.

When the letter was first released to the public it gained a few laughes in the media and on the night-time talk shows, but was quickly forgotten as attention was redirected to a Republican debate the next day

However Trump brought renewed scrutiny on himself by harping on the idea that his 68-year-old opponent, Hillary Clinton, is not physically or mentally fit to be president. He and his surrogates have sought to make health a big issue lately, claiming the Democratic nominee lacks “stamina” and looks “sick.” Trump ally Matt Drudge seems obsessed with Clinton’s medical condition these days, and others in the conservative media have made wild diagnoses ranging from Parkinson’s disease to radiation poisoning.

It was inevitable then that journalists would return to questions about Trump’s own constitution.

CNN medical correspondent Sanjay Gupta reported that Bornstein exaggerated his qualifications when signing the letter as a fellow of the American College of Gastroenterology and a member of the gastroenterology department at Lenox Hill Hospital in New York. In fact, Bornstein has not been an ACG fellow since 1995 and, though he does have admitting privileges at Lenox Hill, he is not on staff there.

Gupta’s report included some of the same observations chronicled last week in a blog post by Jen Gunter, a San Francisco doctor, whose piece was picked up by The Washington Post’s Fact Checker, among others. Gupta appeared on various CNN programs Tuesday, revisiting various holes in the letter that were covered last year — the lack of evidence to support claims about Trump’s good health and the unprofessional writing style, most notably.

Also, the New York Times ran a front-page report that noted the letter from Trump’s physician “contained no details about his heart rate, respiratory rate, cholesterol level, past medications or family medical history.

“The doctor, Harold N. Bornstein of Manhattan, concluded that Mr. Trump, if victorious, ‘will be the healthiest individual ever elected to the presidency’ — a claim that was widely mocked as unprovable and unscientific,” the Times added.