Donald Trump, the leading candidate in the Republican presidential primary, tweeted a graphic with fake statistics about murders in the United States.

The statistics are also racist and wildly inaccurate.

The original tweet was removed so the pic no longer shows, but on the internet nothing is forgotten. 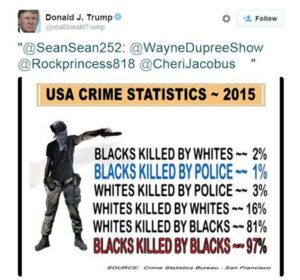 The graphic cited the Crime Statistics Bureau in San Francisco as its source — although that does not exist and the statistics are, quite simply, made up.

So where did the image and the bogus statistics come from?

Blogger Charles Johnson, of Little Green Footballs, was unable to determine its source through a Google Image search or tineye.com — but he was able to find the earliest tweet using the graphic.

The image was posted on the conservative Sexy Patriot account shortly before Trump shared it.

There’s no indication Trump was aware the graphic seems to have originated with a neo-Nazi, but a quick Google search should have revealed the statistics as inaccurate — and its racist suggestions are plainly obvious.