Trump University Was a Massive Scam

They hoped to get rich off real estate, and who would be a better mentor than one of the richest men in the world? So they enrolled in Donald Trump’s university to learn the tricks of the trade, some of them maxing out their credit cards to pay tens of thousands of dollars for insider knowledge they believed could make them wealthy.

With Trump rising in the polls as the front-runner for the GOP presidential nomination, his brief foray into education is an episode — and a business failure — that remains far more obscure than other chapters of the celebrity billionaire’s career.

Never licensed as a school, Trump University was in reality a series of real estate workshops in hotel ballrooms around the country, not unlike many other for-profit self-help or motivational seminars. Though short-lived, it remains a thorn in Trump’s side nearly five years after its operations ceased: In three pending lawsuits, including one in which the New York attorney general is seeking $40 million in restitution, former students allege that the enterprise bilked them out of their money with misleading advertisements.

Instead of a fast route to easy money, these Trump University students say they found generic seminars led by salesmen who pressured them to invest more cash in additional courses. The students say they didn’t learn Trump’s secrets and never received the one-on-one guidance they expected.

It’s a chapter of Trump’s past that shows how he sometimes defies the usual laws of campaign physics. Such allegations of multi­million-dollar fraud might sink other candidates, but in Trump’s case, even some of the students who felt duped said they haven’t given up on him: They like Trump. They admire him. They might even vote for him.

“He says what he means, not like politicians, not like Obama,” said Louie Liu of Hurst, Tex. Liu, a motel owner, said in a sworn affidavit that he paid $1,495 for a three-day seminar, then felt lured into paying $24,995 for more classes, an online training program and a three-day in-person mentorship. A few days later, he called to ask for a refund, but his request was rejected. Trump University, he concluded, was a “scam.”

Trump’s attorneys vigorously deny the charges. Alan Garten, general counsel for the Trump Organization, said the company offered aspiring real estate investors a quality education and that all but a handful of students were pleased with it.

It is unbelievable, Garten said, that anyone could have thought that Trump University was a university in the traditional sense. Classes were held in hotel ballrooms, after all. “People who say, ‘I thought it was a university with a football team and a bookstore,’ it’s laughable,” he said.

Trump University was born in 2004, when two businessmen proposed to offer distance-learning courses in entre­pre­neur­ship under the Trump brand. Trump gave his blessing, according to court documents, becoming a 93 percent owner of the new enterprise.

By 2007, the business had evolved to focus on live real estate seminars. But Trump University was not a university in any legal sense, and beginning in 2005, New York State Education Department officials told the company to change its name because they deemed it misleading. The business became the Trump Entrepreneur Initiative in May 2010, and it stopped operating shortly thereafter.

New York Attorney General Eric Schneiderman (D) filed his $40 million suit against Trump and Trump University in 2013, alleging that Trump had illegally operated an unlicensed university and defrauded students. Approximately 80,000 people attended Trump University’s free introductory seminars, according to court documents. About 9,200 of them went on to pay $1,495 for three-day seminars, and nearly 800 paid up to $35,000 for packages that included mentorships and workshops.

“No one, no matter how rich or popular they are, has a right to scam hard working New Yorkers,” Schneiderman said in a news release at the time.

Trump attacked Schneiderman, calling him a “political hack” whose lawsuit was a publicity grab and a shakedown for campaign contributions. “We have a school that’s a terrific school. It did a fantastic job,” Trump told ABC’s “Good Morning America” in 2013.

Trump’s campaign referred questions to Garten, Trump’s lawyer, who said the allegations are baseless and expressed confidence that Trump will prevail.

Matt Mittenthal, a spokesman for Schneiderman, said the attorney general could not comment on the pending suit. “We will continue to pursue our claims against Mr. Trump in court on behalf of the people he defrauded,” Mittenthal said.

The judge in the New York case ruled last year that Trump is personally liable for illegally operating a university without a proper license. But the judge also ruled that the statute of limitations prevents Schneiderman from seeking restitution for most of Trump University’s students, a decision Schneiderman is appealing. Whether the university defrauded students and how much Trump might owe in damages are yet to be decided.

Trump University introduced itself to potential customers with advertisements on radio and television, and in newspapers. The ads promoted a free, two-hour real estate seminar and a chance to learn Trump’s strategies from his “handpicked instructors.”

“He’s earned more in a day than most people do in a lifetime,” reads a 2009 ad featuring Trump’s photograph. “He’s living a life many men and women only dream about. And now he’s ready to share — with Americans like you — the Trump process for investing in today’s once-in-a-lifetime real estate market.”

The ad goes on to quote Trump: “I can turn anyone into a successful real estate investor, including you.”

The soundtrack for the free seminars was “For the Love of Money,” the theme song for “The Apprentice,” Trump’s reality television show. Instructors allegedly told inspirational stories of their own business successes and then encouraged students to pay $1,495 for a three-day workshop.

Students said they were swept along by the promise that they were getting the best real estate education money could buy, according to interviews and several dozen complaints and sworn affidavits filed with the court. But they claimed that the seminars were another sales pitch: To learn how to make it in real estate, they needed additional workshops and mentoring at a cost of up to $35,000. 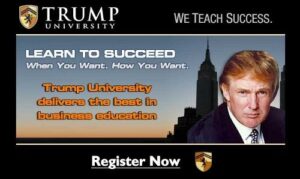 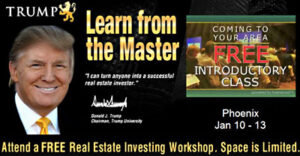 Were the professors the best brains in the industry and hand picked by Donald Trump as he promised?

No. They were hired motivational speakers with limited-to-none real estate background and not picked by Trump. In a deposition in the Cohen case last December, Trump suggested under oath that he was not very involved in hiring instructors, despite the program’s promotional materials suggesting otherwise and his lawyers asserting he was “very involved.” Rather, Trump said, “I would see résumés. … I told [Trump University’s president] I want very good people.” He also said he did not personally select instructors for 2009 live seminars

Did Trump University have a A+ rating from the Better Business Bureau, as Trump claims in his defense.