On the surface, Trump’s tweet was innocent enough. It featured a photo of the Republican presidential candidate embedded in an American flag. Within each of the three visible red stripes were photos of money, the White House, and soldiers.

But former National Security Agency analyst John Schindler repeatedly wrote on Twitter that the men at the bottom of the photo were actually Nazi soldiers.

Trump’s campaign subsequently deleted the tweet and told The Hill that an intern was at fault. Michael Cohen, a Trump spokesman, reportedly pointed to Trump’s Tuesday event in Charlottesville, Virginia, and said the real-estate developer was not involved in the creation of the image.

“A young intern created and posted the image and did not see the very faded figures within the flag of the stock photo,” Cohen told the paper. “The intern apologized and immediately deleted the tweet.”

In all honesty this is probably just what it seems, an intern not knowing any better. But it doesn’t exactly help Trumps image when it comes to white supremacy.

Notice the late-war Waffen-SS "dot" camo tunic, with SS eagle on left arm as in the Trump pic https://t.co/b3pwWmdwHY pic.twitter.com/ulScwicbZU

Mother Jones was able to track down the original stock photo and photographer, apparently shot during a reenactment. 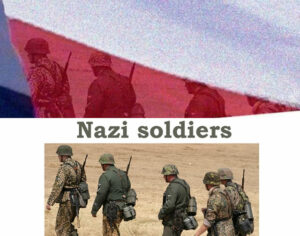